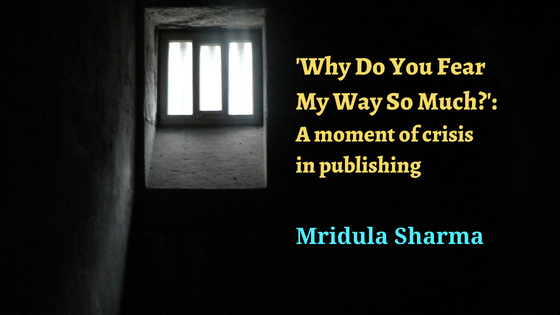 “My cage prohibits all relations

and bans love proscribing the language

of hearts, as the woman behind me

reminds, ‘Speak only in Hindi’, while you

stand on the other side of the opaque

fibreglass window; words fail me, as though

I have forgotten out language of love and intimacy,”

The “cage” is Nagpur Central Jail’s anda cell, named for its egg-like shape that lets in rain and scorching heat alike. Here, the only acceptable language is Hindi, even when the prisoner can barely speak in the language. The poet languishing in the high security “cage” is Professor G.N. Saibaba.

The aforementioned stanza is an excerpt from “How Beautiful to Wait for Your Visit,” one of the many poems in Saibaba’s recently published collection titled, Why Do You Fear My Way So Much?. Disguised as an expression of love for his partner, the poem articulates the trauma of the denial of speech. At the book launch of the collection, Meena Kandasamy criticised such “thought policing,” stating how the imposition of Hindi is an attempt to cut off his tongue.

Imprisoned on account of his alleged connections with Maoists, Saibaba is among the many academics whose public investment in conversations on class and caste has led to arbitrary legal action. Sentenced to life imprisonment in 2017, the Bombay High Court’s order on his acquittal in October 2022, was quickly suspended by the Supreme Court. Arundhati Roy, another panelist at the book launch, noted how activists and intellectuals, such as Saibaba, who campaigned against Operation Green Hunt had since been arrested. Operation Green Hunt was ostensibly positioned as an all-out offensive by paramilitary forces to counter Naxalite-Maoist insurgency, but Roy’s eye witness account, Walking With The Comrades, counters this misperception and exposes the Operation as a systematic attempt to target adivasi communities and secure land for mining corporations.

At a time when solidarity is criminalised, Saibaba’s Why Do You Fear My Way So Much? announces itself as an exercise in resistance. It offers us an opportunity to attend to realities that challenge socially acceptable narratives. The poems in the collection reveal contradictory ambivalence of surveillance: Saibaba remains isolated and alone despite being constantly surrounded and monitored. Yet, he is unable to let go of hope:

“I still stubbornly refuse to die

The sad thing is that

They don’t know how to kill me

Because I love so much

The sound of growing grass.”

To publish poetry that refuses anything less than the truth, that speaks to and acknowledges the realities of those marginalized, violated and often demonized by the state, is not easy. As readers with purchasing power increasingly challenge subversive writers and stories, the crisis in publishing grows. In publishing Saibaba’s work, independently run publishing house Speaking Tiger has resisted political pressure to print books that borrow from and feed the government’s agendas.

At the book launch, Roy summed up the Indian government’s weaponisation of the publishing industry and unmasked the barriers and means of suppression that recipients of state violence face. Kandasamy similarly expressed how a police complaint could be filed against the panelists simply for the conduction of the event. In contrast to the launch of Saibaba’s poetry collection lies the launch of Modi@20, an event that occurred not only in the absence of immediate threats, but also with the support of state infrastructure. Top personalities in politics, film industry, and academia were in attendance. The contradiction in the conduction and reception of the two events sums up the crisis in publishing today.

The events surrounding the production and promotion of Saibaba’s poetry provide a glimpse into a culture of overwhelming fear. This tension is particularly palpable in publishing. Statewide bans on books by Nikole Hannah-Jones, Ibram X. Kendi, and Nic Stone evince intolerance of histories and narratives that challenge the longstanding tradition of racism in the US. In Scotland, Picador’s inadequate redressal of concerns regarding racism in Kate Clanchy’s Some Kids I Taught and What They Taught Me hints at an institutional unwillingness to imagine productive social change. As we see leading publishers in India invest in books that openly glorify Prime Minister Narendra Modi’s regime, the crisis deepens.

To seek solace, we must return to Saibaba, who remains a prisoner of hope in spite of persisting state violence. He reminds us to “break / your silence at this / moment of crisis” and “go shouting / aloud in the open streets.”

Mridula Sharma is a research scholar and a writer. She has secured scholarships and grants for her work by institutions in Germany, England, India, and the US. Her work on developing postcolonial visions is informed by intersections of gender, class, and caste. She hopes to bridge the gap between theory and practice in her personal and professional capacity.