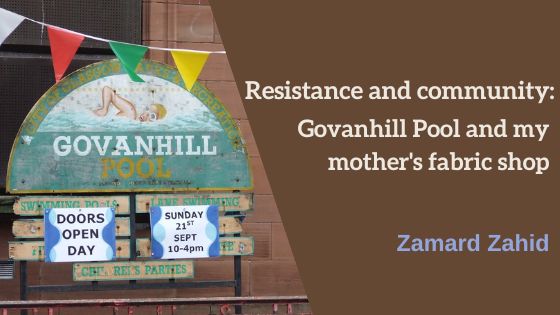 Six days a week at 11am, for twenty-five years, my mother Zarina Begum pulled up the shutters and switched the lights on to open one of Govanhill’s first three fabric shops. The coloured lights from silks, velvets and georgettes would cascade onto the damp grey pavement of Cathcart Road. Streams of dazzling cerise’s and limes illuminated the street. Mannequins bound in embellished floating chiffons enticed South Asian women pushing wet prams filled with disgruntled children. They would hastily tame their flapping dupattas and step inside out of the cold.

At the top of adjacent Calder Street stands one of Glasgow’s last remaining Edwardian public bathhouses, Govanhill Pool. I remember being an eight-year-old swinging a towel rolled inside a plastic bag on my way to swim there or take a bath. I stored it in a metallic cubicle. Rows of them drowned in hazy steam from the hot baths, where carbolic soap was scrubbed onto scuffed knees and limitless hot water would soak away the grime. It was a busy and vital facility used by the community for leisure, health, and hygiene.

In the 80s my mother’s fabric shop and Govanhill Pool shared invaluable commonalities. When their doors opened, they created a lifeline and a hub for the immigrant South Asian women. They became safe spaces for interaction, fusion and the cohesion of different races and cultures. These places breathed fortitude into Govanhill’s community spirit.

Buying cloth at the shop was a slow process involving discussion, selection, bartering, payment or putting it in “the book”, all punctuated with chat. The same luxury of time was extended to the South Asian women when they visited the baths. By the poolside, especially on Wednesday ladies only swim days, weddings were arranged, dowries discussed, heartbreaks of wayward children shared, and births and deaths noted. Women were able to form meaningful connections without which they would have been left isolated, invisible, and unappreciated.

As a young teenager peering over the deluge of fabric rolls, I know I witnessed a unique time. 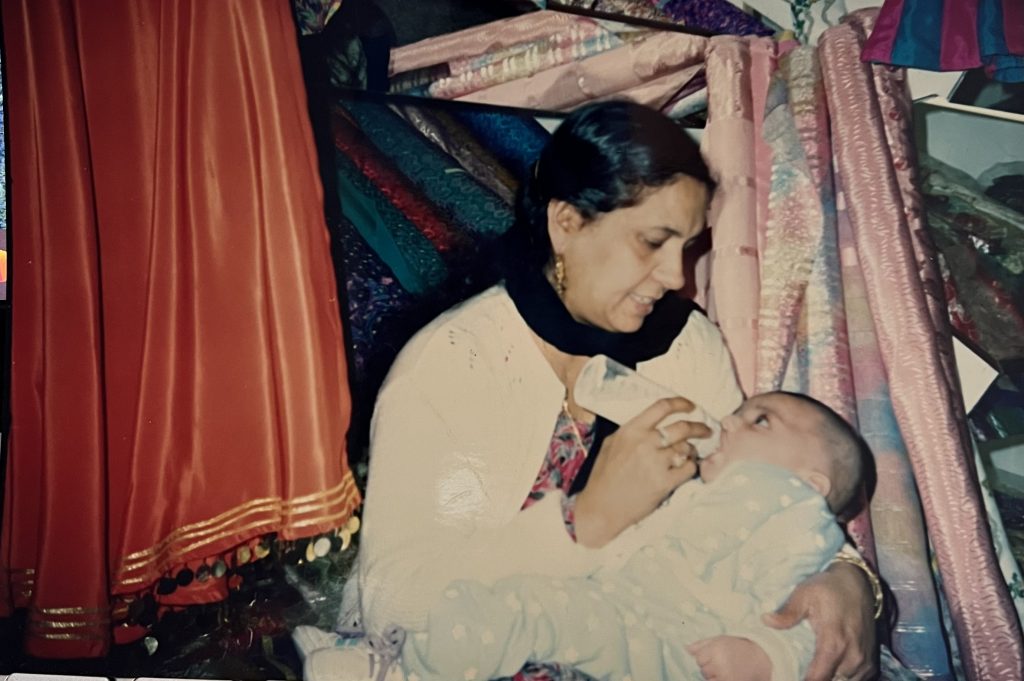 A frequent visitor to the shop was Bibi. After the partition of India, she’d made the treacherous journey to Multan in Pakistan before arriving in Govanhill with her husband in the 60s. She was widowed soon after having three children. Born with a curved spine she was an easy target for racism.

Despite the difficulty of climbing down the stairs of her close, Bibi’s trips to the fabric shop and her Wednesdays at the Pool were highlights of her week. A triangular scarf knotted at her neck, she would stop at the newsagent’s so Ali could hand her a few old Urdu newspapers he’d kept aside for her, then she’d make her way to the Pool. There she slowly developed a confidence and camaraderie with two older white women. They listened to her broken English amid flowing Punjabi with patience. Although fiercely independent, she allowed them to assist her into and out of the pool as she eased her back pain. It was a relationship born out of compassion.

Bibi was a familiar fixture in the corner of my mother’s shop for many years. When her daughter died of cancer, Bibi began to decline. After a stroke she was left unable to speak. My mother would visit her home instead. Bibi died in her flat in Alison Street, refusing to leave the community she had found.

Sunna often visited the shop with her three children in tow. She struck a deal with her curly-haired daughter and impatient boys – she would take them swimming, then she would have her time at the fabric shop. The three hours spent outside her home were priceless to Sunna, who had been propelled into a life of misery after a hasty love marriage in Lahore six years earlier. In the shop and at the Pool she could escape her husband’s violence.

When Sunna’s husband abducted the children under the pretence of a holiday, she sought solace in my mother’s fabric shop. I listened as she told my mother that a man she’d turned to for help had asked for sex in return for his aid. Her tears spilled. My mother held her, pressed a tissue into her hand and listened as Sunna said her desperation had made her consider it for just a few seconds. At Govanhill Pool, a Scottish woman connected Sunna with a genuine lawyer who helped her fight. After three years, her children were returned to her.

The fabric shop was so much more than a business where draped blazing cuts of chiffons and georgettes were pushed aside as women jostled to be served first. My mother would expertly rip her scissors through endless waves of fabric as an exuberant energy infected all the women. That space gave them the luxurious freedom of raising their voices in their native tongue. A place where there was no need to explain or justify. A rare feeling of belonging and being seen as more than a brown face with odd clothes.

Little Scottish girls pressed their noses against the fabric shop windows. Flame red banarsis and sparkling midnight blue organzas lit up their cold pale faces. Scottish mothers hesitantly stepped in, seeking dress materials or curtain fabric. My mother would proudly pull out her most striking designs as the women exclaimed at this cavern of foreign delights in the heart of Govanhill. At a time when overt racism was prevalent and hostilities towards immigrants was rife, the fabric shop was a positive force of cultural fusion.

The same energy flowed on Wednesday Ladies only swimming days at Govanhill Pool, where women’s uninhibited laughter would echo between Punjabi chatter and tumultuous splashing. Sitting on poolside loungers, mustard oil was massaged into each other’s scalps and bulges of bare brown skin were proudly shown off. Wednesdays for the Asian women meant freedom from societal and cultural expectations.

It was through the pink blur of chlorine filled eyes and shrieks of laughter in the Govanhill swimming pool that prejudices dissipated and connections crossed boundaries. 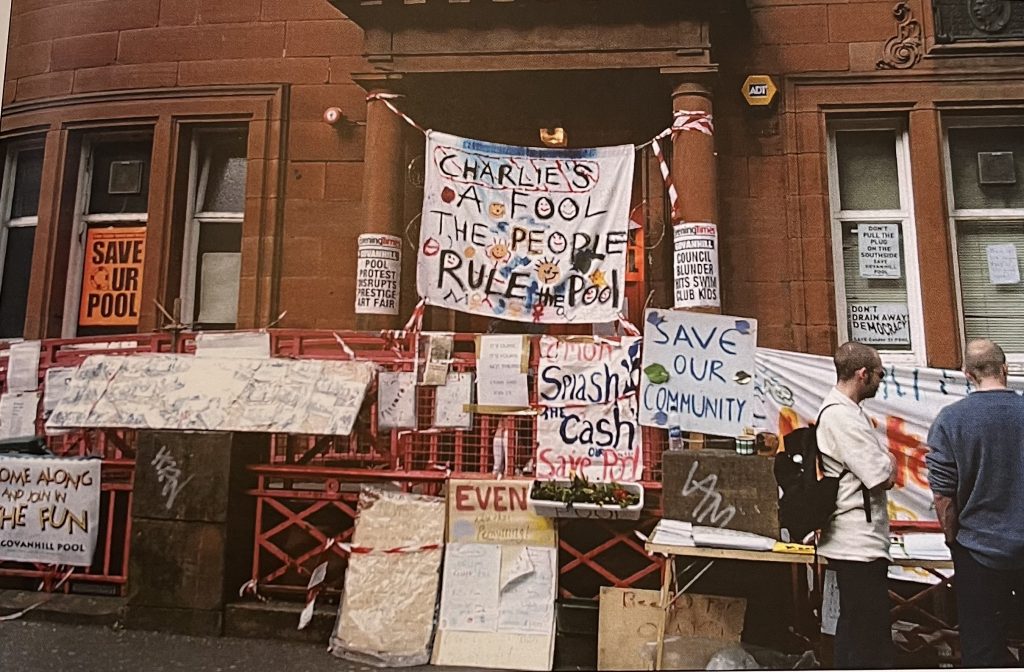 As my mother gets older her memory fades and the stories of the women who visited her fade with her. Online stores are popular with the younger generation of Asian girls. It is with a sense of loss and nostalgia that I walk past my mother’s shop now. The fabrics in the window seem subdued. The man inside folds his silks alone.

On 6th January 2001, Glasgow City Council, without consultation of community or users, announced the decision to close the Pool. The refusal by authorities to consult or engage with community groups resulted in a nineteen-year battle, demonstrations, a hundred and forty days of occupation, countless picket lines and the most powerful story of community action and resistance in Scottish history.

The determined perseverance of the area’s diverse communities finally paid off; after 19 years of campaigning, the Govanhill Baths Community Trust secured funding in 2019. The pool will reopen in 2023, as a Health and Wellbeing Centre run by the community, to serve the needs of the people of Govanhill.

The building still stands uncompromising, representing much more than the power of the community and their resistance to state control – it honours their fighting spirit, perseverance and their many untold stories. 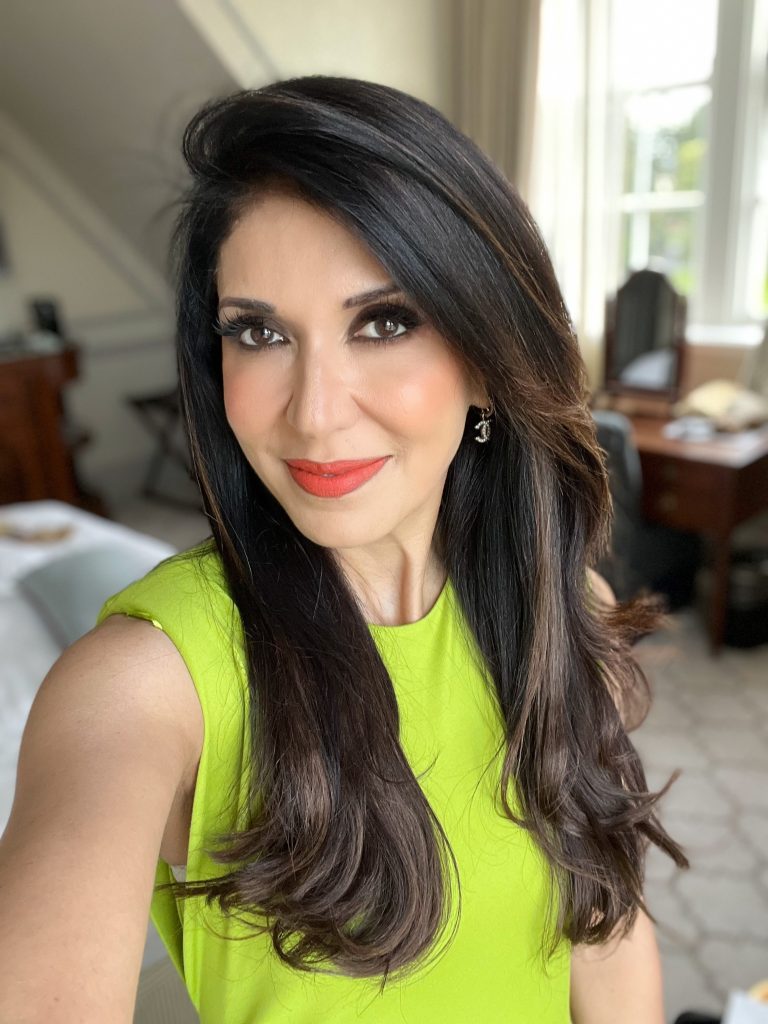 I taught English for 22 years and I have always been a passionate advocate for racial justice and equality within education. I recently left to develop my passion for writing and completed the Harper Collins Black Authors Academy. I am finally writing my first book. I have been published by Holyrood Magazine on behalf of Pass The Mic. I contribute to STV Expert Voices in the Media on human rights and equality issues.

I recently became a grandmother for the first time and there is nothing that gives me more joy than spending time with my granddaughter Layla.