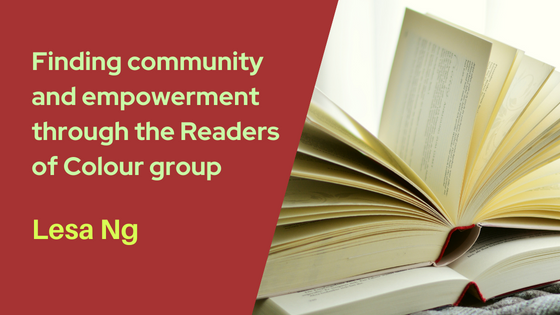 It is not a hyperbole to say that Readers of Colour has been life changing. In it I have found a nurturing safe space that has helped me find my voice and give me the opportunities, inspiration, and confidence to write, create and be an active community organiser.

I discovered the Readers of Colour (RoC) book group, founded by the wonderful Nadine Aisha Jassat in 2018. Prior to this I had lost my love for reading and did not like the books that were recommended or available to me. Since then, my mind and my heart have been opened up to so many writers and creatives of colour, including RoC members themselves. They each bring their own varied life experiences and knowledge to the group. It has come to show me how crucial it is to have community and a sense of belonging, especially in a world that is systematically stacked against us as women, non-binary people, who also face racism, ableism, and queerphobia. How I wish I had known about the works of Maud Sulter when I was at school in Glasgow. How we laughed after watching Nida Manzoor’s ‘Lady Parts’ and how happy we were when a six-part series was commissioned. [1]

Amongst the laughter though we have had to defend and justify the very existence of our group. One time, a white man, steeped in his (unknown to him) privileges, accused us of excluding people. He did not understand the need for such a space. It made me think of this cartoon from Alex Norris. If we include them (white people) what would that mean? In my experience it would silence my voice and turn discussions and the focus of a space onto the very people and their white fragilities, this white man accused us of ‘excluding’. Reni Eddo-Lodge discusses this eloquently in the context of creating Black feminist spaces in her work Why I’m No Longer Talking to White People About Race.

All forms of media have failed to truly represent me since childhood; from the wrongs done to Anna May Wong to a certain ‘actress’ being cast in the role of a Major character (still RAGING about that!). [2] Representation matters, if I do not see myself on the screen or read stories that I can emphasise with on the page I do not feel like I belong there.

I grabbed the opportunity when the BBC show ‘The Big Scottish Book Club’ made a callout for book groups to appear and organised for us to apply. A group as special as ours should be represented. RoC features on episode 8 of series 3 [3] discussing Supporting Cast by Kit de Waal and we would have loved it if Kit could have heard it (you are welcome to RoC anytime Kit!). While the final edit was only a few minutes long, outside of that we had the most wonderful discussion that was thought provoking and beautiful.

I almost pulled out of filming due to my fear of public speaking but was vetoed by fellow RoC members: “you have to appear, you organised this”. Still now, I felt that I did not speak coherently each time the camera pointed at me, although others said this was not the case. On reflection I wonder if I believed that the safe space RoC provides me with was being invaded by talking about it to camera, perhaps this led to me to not speak as I normally would. Thankfully the other members were their eloquent and natural selves. During the audience filming I also felt uncomfortable being seated front and centre behind the authors and surrounded by a white audience. I felt exposed to their white gaze. One of the RoC members enjoyed the experience greatly, and I wish I would have been able to follow their ready acceptance of the (well-deserved) attention, instead of feeling I did not belong in the spotlight. Indeed, when a white male friend watched the show they said, “I know the group is not meant for me, but it looks like a great club to belong to”.

Who tells stories matters too. Stereotypes perpetuated by white people in books and other media are harmful. Maybe this is why I submitted a poem to the Scotland Stories Now project. When I was asked to read it at the Edinburgh International Book Festival, I surprised myself by agreeing. Given the topic of the poem (racism) I was still reticent about how much I wanted my voice to be heard and purposely did not tell some white friend groups about this. I did however mention to every RoC member I could to book a ticket. I was extremely nervous beforehand but seeing all those RoC members (and other friends) in the audience gave me the calm and strength to read eloquently and naturally and it was an amazing, enjoyable, giddy experience. One friend said that listening to me read drove home the meaning behind the poem more so than when reading it to themselves had. Another said I was an inspiration to them!

“So, are you Malaysian?”, a white woman asked me afterwards during an audience activity where they were encouraged to write their own stories. I had been introduced as a writer from Glasgow and also explained (prior to my reading) that my poem was a pantoum – a Malaysian verse form. I reiterated this information but then my friend and I could see the othering (where are you really from?) forming in slow motion from her mouth. “No, no I meant your family”. Did this ruin the experience? No. The warm friendship, support, and solidarity surrounding me was enough to protect me from the slight. I swatted the comment away – as it deserved. I even felt an amount of amusement at the irony of it considering the content of my poem. No matter that she had not listened or understood, what mattered was that others did. I was an inspiration. I stood front and centre and deserved the attention. My story belonged in that space. Having a community that encourages me and emboldens me to be brave enough to do deeply uncomfortable things comfortably is a very powerful feeling indeed.

[1] Currently available on the All 4 video on demand service

[2] It was wrong in the days of Anna May Wong, and it was wrong in the 21st century that Scarlett Johansson was cast as Motoko Kusanagi in the live action version of Ghost in the Shell, in my opinion the only character she could have been is the Puppet Master.

[3] Episode 8 of Series 3 is available on BBC iPlayer https://www.bbc.co.uk/iplayer/episode/m0012yzy/the-big-scottish-book-club-series-3-episode-8 until the 19th December 2022. 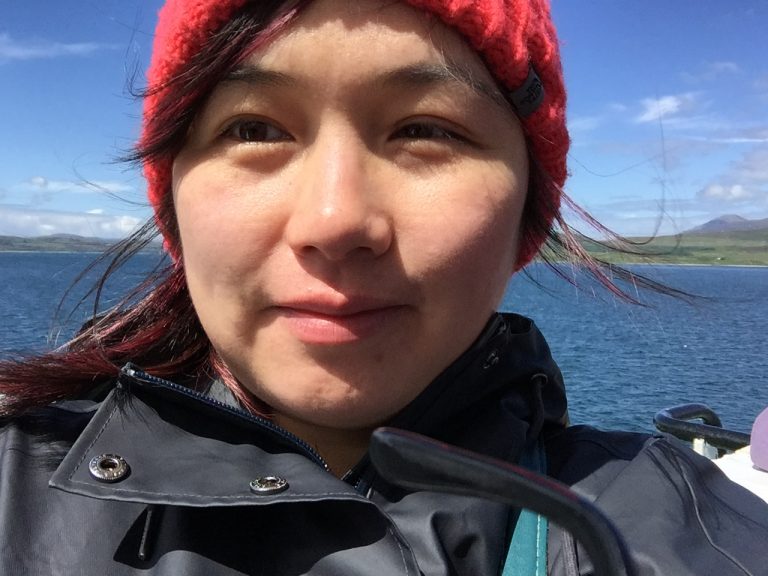 Lesa Ng (she/her) is an Edinburgh based Glaswegian at the tentative beginnings of her creative writing journey with both prose and poetry. In October 2021, Lesa took a lead role in organising for the inclusion of the Readers of Colour book group on the BBC show The Big Scottish Book Club. Her work was recently published in the Responders of Colour Annual (2022) and she appeared at the 2022 Edinburgh International Book Festival as part of Scotland’s Stories Now.