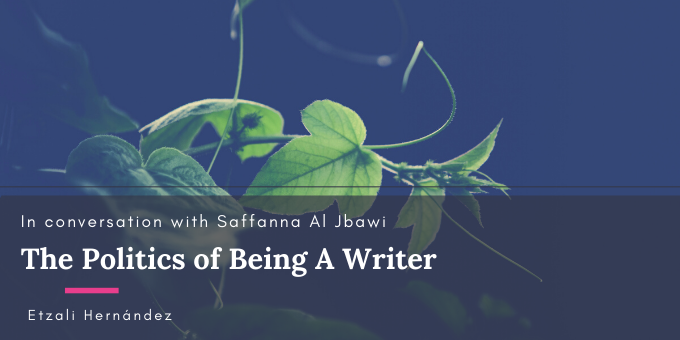 When I first came up with the idea of interviewing someone from the asylum-seeking and refugee community, I thought that writing this blog post would be harder than finding someone to interview. Rumour had it that I was wrong!

I had to stop for a while to reflect on who gets to call themselves a writer and why. During that time, where I was contacting people in my network, many folks kept asking me:

Do you mean someone who has been published?

Are you looking for someone who has been writing since before they came here?…

Some of these questions came up during my conversation with Saffanna as well. While I don’t have answers, we must as a community reflect on these topics that are, of course, very closely interlinked with whiteness, and destroy the gates that keep so many of us out systematically.

It is also important to mention that I’m writing this after unrelenting weeks of Scottish nationalism and a complete disregard from the UK government to provide safe housing, mental health and financial support to people seeking asylum in Glasgow during the ongoing pandemic. The current Home Office subcontractor for housing in Scotland, Mears Group, moved thousands of people seeking asylum out of their homes and into hotels where social distancing is/was practically impossible, without access to healthy food, money or emotional support. As a consequence of this, two people have died and many more have been hurt and re-traumatised.

Below is my interview with Glasgow-based Syrian poet. She came to the UK in 2013. Before coming to the UK, she worked as a teacher. Her work up to now has two stages, the poetry in Arabic that she wrote back in Syria about her experiences as a woman and the beautiful things that surrounded her, and the poetry in Arabic and English that she has written in the UK around her experiences as someone fleeing war and undergoing the asylum system. Included with this interview are two of her poems: “The Trip of Death & The Shattered Hopes” and “Lost.”

What inspired you to start writing?

I realised that everyone needs someone to listen to them and what they are going through.  This is especially true when you’re facing problems or feeling homesick. For me, the best way of getting all this out of my system is by writing. I feel like most of the time, it is better to write than trying to convey all your feelings and worries to someone. That way it comes from a personal space of wanting to be heard and acknowledged.

If you could tell your future self anything, what would it be?

I would like for Saffanna to forget all the horrible things that happened in the past. To think about her children and their future, to imagine all the possibilities of what their lives could be. I would also like her to have the assurance that things have resolved in Syria and she will be able to see her family and friends.

How important is it for you to have your life experiences, culture and religion represented in your work?

I have come to realise that a lot of people think that whoever came to the UK and had to undergo the asylum system, did this because they want to get benefits and because it’s impossible to get a job back in their countries.

As a Syrian woman, I didn’t come here because of economical problems, my husband and I had jobs, our family lives there and we had a house. We came here because we were fleeing war and trying to keep our children safe.

I tried to portray all of this in my work, I have written poems that describe the journey some people take, risking their lives to cross the sea in their search for safety. A poem is an entrance to someone else’s culture and religion so these are elements that are vital for me to have represented in my poetry.

Has the way you approach your writing changed since you came to Scotland?

Rules are different in English and Arabic. Now I write in English and I translate it as I find that easier. In Arabic, there’s more of a strict structure. However, even then I was able to write more about the happy things that surrounded me like my parents.

In English, despite the fact that it is easier, I find myself in a loop of writing about the sad and difficult memories of what I have endured. I think a lot about the people who we left behind and as well the ones who have passed away: sisters, brothers and friends, and when you are missing them, it is very hard to write about something other than that. Coming here was a life-changing experience.

I must say that I did manage to write something more cheerful about Scotland’s culture and the way we have been welcomed in here despite what I mentioned earlier.

How important is it for you to translate your work?

For me, this is a must, especially when trying to reach a wider group of people. I translate it here as many Scottish people don’t speak Arabic, and I also make my work accessible to the Arabic speaking community who don’t speak English.

I have no problem translating my work, however, it is very hard finding the words that will keep the format of the poem, the meaning and rhythm. It is a work that requires a lot of dedication and carefulness. I have translated poetry for other writers during book festivals and even with this experience I still find it challenging. It takes a lot of hard work to find the right words to keep the meaning of the poem.

Where can we read or listen to your work?

I don’t have anything published or online, except for the poem that was used by the Saint Fillan’s Primary School pupils to create an animation. The poem is called “Under the Jasmine Tree.”

I feel like I haven’t written enough to have anything published so maybe in the future I will have a good body of work that could be shared or made into a publication.

The Trip of Death & the Shattered Hopes

She folded her tent and chose to leave
For an unknown fate…
She held her son’s hand and walked…
All the while she was hiding her tears.

The sun was catching its light,
The autumn leaves scattered here and there.

Her child was cuddling the remains of his doll.
He was wondering where…?
‘To the sea…?’ he said.
‘Is there another camp…?
‘I love the sea…
In his imagination he started to escape,
Building a sandy castle
Or gleaning some shells.

Wretched people thronged there,
To flee or maybe to die…
Too much fear, too little hope.
What after that…?
Tired eyes. Broken hearts.
Famished souls.
Screams dissipated…

Got lost in the wind’s gusts.
They tasted different types of death.
Their graves were everywhere.
Their boat arrived
But they did not arrive…

Dreams were planted somewhere…
Bodies were scattered everywhere… tales here and forgotten things over there…
The games of predestination… the children’s stories
Everything exists but all is missing!
She plays the most beautiful song on the strings of her guitar… she plays although the strings have snapped!!
She whispers to the wind, perhaps the wind will carry the echo.
Still wondering if she has lost herself in that valley? Or if her emotions and her tears have gone to the frozen pole?
Or maybe they have turned into a sleeping volcano somewhere.
Her paintings have lost their colour and they became dim.
Something inside her is screaming but no one can hear…
Internal wounds. It is hard to see them when they bleed.
She lost her ability to count, no longer knowing how many days have passed since the day of loss. A trifling chatter wander around. Shakes her hopes and brings her misery
back.
She is here but she feels that she is there… this is the mystery between the body and           soul
Time may stop or she wants it to stop.
The crow’s voice in these fields attracts her as if it is reminding her of something.
She runs precipitately. She looks for…? Then she returns and her hair is swaying with the wind and dew drops are caressing her cheeks.
I can no longer tell whether she is sad or not… she is dreaming or pretending to                   dream.
I think she is trying to find oblivion. 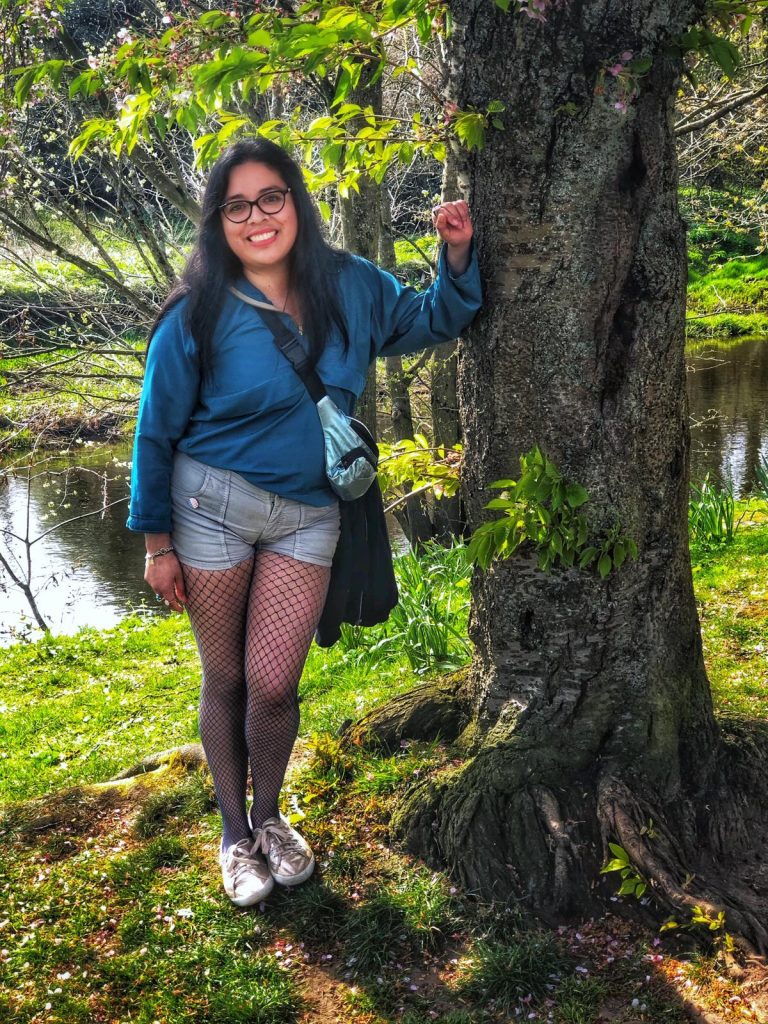