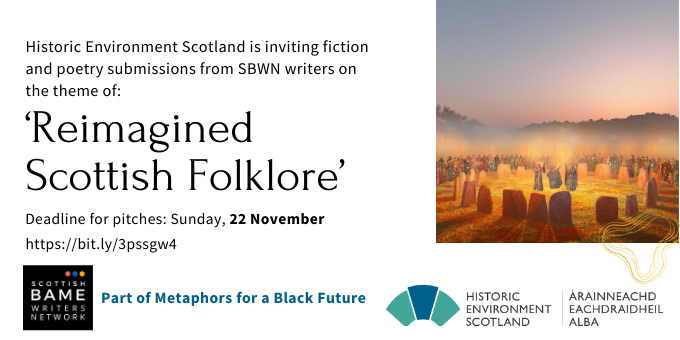 As part of our Metaphors for a Black Future programme, we have partnered with Historic Environment Scotland to commission two SBWN members to each produce a piece of fiction or poetry responding to the theme of ‘Reimagined Scottish Folklore’.

Commissions will be published on the Historic Environment Scotland blog and may potentially feature in a future live-streamed storytelling session with Mara Menzies on World Storytelling Day in March 2021.

Each commissioned writer will receive the fee of £200.

Here’s some inspiration to get you started:

The Gaelic tale of Beira

Beira was the Queen or Goddess of winter, who built the mountains of Scotland with her magic hammer, using the tallest (Ben Nevis) as her throne. The longest night of the year marked the end of her reign, when she would drink from the well of youth and get younger every day, as the light returned. She was also known as Cailleach, meaning old woman or hag in Gaelic.

The name Beira was popularised by 20th century folklorist Donald Alexander Mackenzie and his version of the tale is the most well known. In Mackenzie’s tale, Beira creates Loch Awe (by Kilchurn Castle) and he describes how she made Loch/River Ness (Urquhart Castle).

The Story of Kemp

A ferocious giant of a man who made his home in the stronghold that today is known as Castle Campbell in Clackmannanshire. His name was Kemp and he was phenomenally bad tempered, ill-mannered and disrespectful of authority. One day, this giant strode into the Dunfermline Palace, grabbed the king’s dinner and returned to his lair without a backwards glance.

An outraged young knight tracked Kemp down and confronted the fearsome giant over his unforgivable cheek. After an arduous battle, which is said to have caused a deep fissure beside Castle Campbell now called ‘Kemp’s score’, the hero slew the giant, threw his body into the burn below and took his head back to the king in Dunfermline.

According to the Dictionary of the Older Scottish Tongue, a kemp is a champion or fighter of mighty stature and great strength. The full story can read online.

Brownies
There are various descriptions of creatures known as brownies. Generally, they are depicted as small creatures, usually male, with reddish brown hair. They are shy creatures who like to remain unseen and who help with household and farming tasks at night, while their human counterparts are asleep.

Traditionally they receive small gifts of food in exchange for their labours and will abandon a dwelling if these offerings are referred to as payments, or if anyone in the household mistreats them. Brownies prefer to live in unused parts of a building, such as an attic.

They feature in many stories – one is summarised on the HES blog and the rest on Wikipedia.

You can also explore the Historic Environment Scotland collections and archive for yourself:

Finished pieces should be no more than 1,200 words.

If you would like to respond to this commission, here’s how:

Pitches should be no more than 350 words and include:

Please email pitches to Ali at ali.george@hes.scot by midnight on 22 November