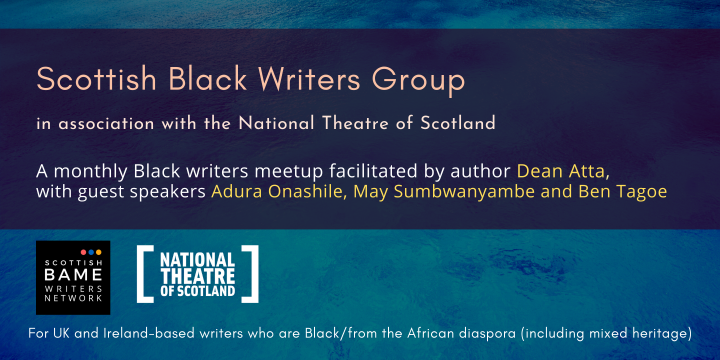 We have a new lineup for Scottish Black Writers Group, facilitated by writer Dean Atta in association with the National Theatre of Scotland!

Scottish Black Writers Group is a free writers group facilitated by our Co-Director Dean Atta and in association with the National Theatre of Scotland. It is a monthly meetup open to writers across the UK and Ireland who are Black/from the African diaspora, including people of mixed heritage.

Scottish Black Writers Group is a space to meet, chat, network and talk about the writing life – writers both published and unpublished are welcome to join us.

You may sign up for one, several or all writers group events.

Third Thursday of the month, 7-9 pm

In the past, we have been joined by guest speakers such as Eric Ngalle Charles, Leila Aboulela, Delia Jarrett-Macauley, Alex Wheatle,  Nandi Jola, Nick Makoha and Dorothy Koomson.

Please be mindful when booking. The Scottish Black Writers Group is for writers based across the UK and Ireland who are Black/from the African diaspora, including people of mixed heritage. 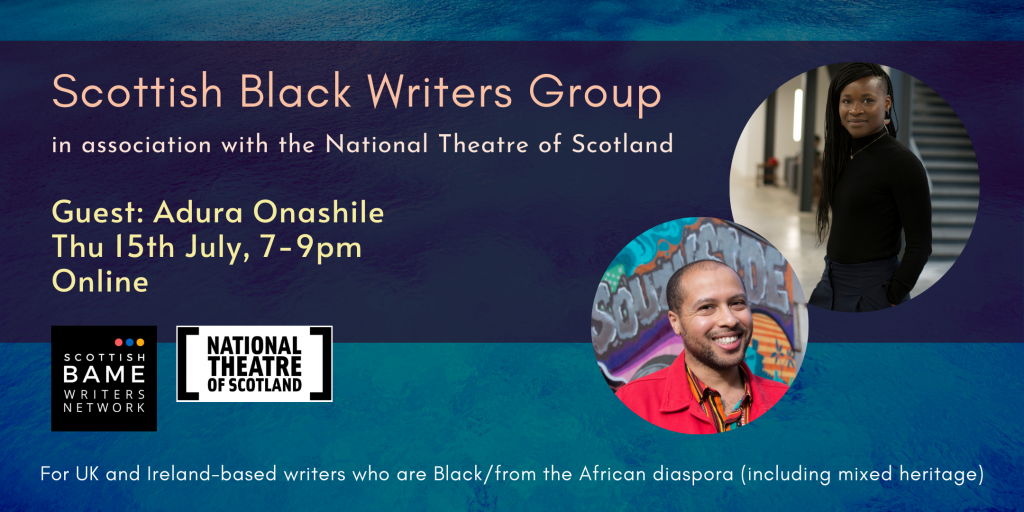 A peer support and social space facilitated by Glasgow-based author Dean Atta for Scottish Black writers and Black writers based in Scotland to meet and discuss with Black writers from across the UK and Ireland, with a guest speaker each month courtesy of the National Theatre of Scotland.

In July we’ll be joined by Adura Onashile. Adura Onashile is an award-winning Glasgow based artist. She has been a part of the British Council Edinburgh Showcase and has worked with companies such as Untitled Projects, Royal Shakespeare Company, Young Vic, Theatre Royal Stratford East, Chicago Shakespeare Company and St Anne’s Warehouse, New York. She has premiered two productions, HeLa and Expensive S**t at The Edinburgh fringe festival, winning a Fringe First, Edinburgh Guide Best Scottish Contribution to Drama and TOTAL and Amnesty nominations.  Her inquiry into the contexts in which she makes and tours work as a Black artist in Scotland, led to a series of discussions titled “Empowering Change: Discussions on Art, Race and Privilege”. Named number 10 in The List magazine 2018 HOT 100, she was described as “creating politically charged and provocative work, Onashile is proving that she simply cannot be ignored”. Her debut as a filmmaker, short film, Expensive S**t, premiered at the London Film Festival 2020. She is developing new work across Theatre, Film and Television and is a recipient of the Channel 4 playwright bursary. 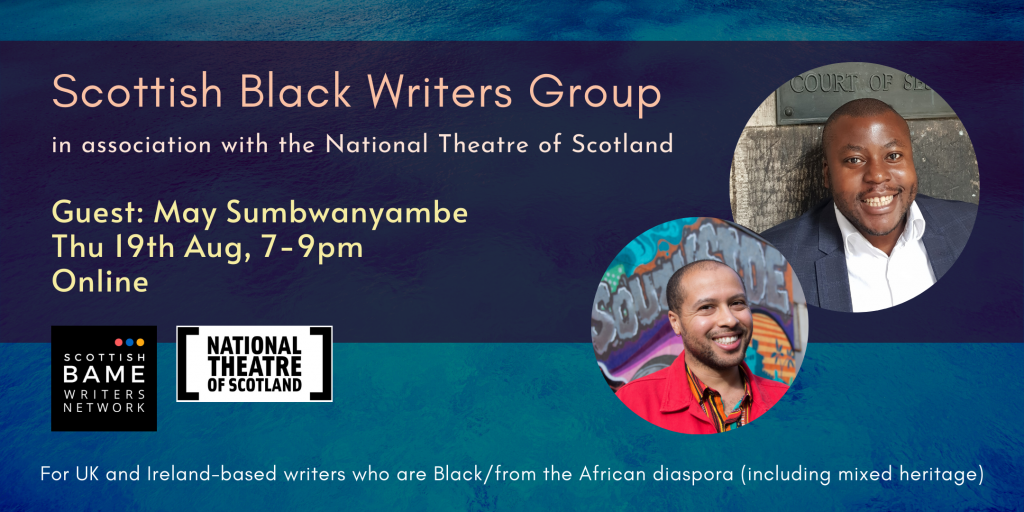 A peer support and social space facilitated by Glasgow-based author Dean Atta for Scottish Black writers and Black writers based in Scotland to meet and discuss with Black writers from across the UK and Ireland, with a guest speaker each month courtesy of Scottish PEN.

Previous productions include; After Independence (Arcola Theatre, Papatango Theatre) The Parrot House (The Royal Opera House, Guildhall School of Music and Drama) ‘After Independence’ and ‘The Trial of Joseph Knight (BBC Radio 4).

He is currently writing new stage plays for The National Theatre of Scotland and The Citizens Theatre, and a new TV Series for Two Rivers Media and the BBC. His last play saw him described by The Times as ‘a rare discovery’ and The Telegraph as ‘a writer of terrific potential’.

As an academic, May worked for The University of Edinburgh as a teaching fellow in Theatre (2018-2019). He has been an Associate Lecturer at Edinburgh Napier University for 3 years and is also currently a Lecturer in Creative Writing and English at Northumbria University. In 2018 May was a contributing author to two theatre theory books, ‘How to be a Playwright’,(Nick Hearn Books) and ‘Revolution: 50 Years of Making Political Theatre’ (Pluto Books Limited in partnership with Edge Hill University Press). May’s Undergrad degree was in law (LLB). He studied for his masters (MA) at Guildhall School of Musical and Drama in ‘Opera Making’, where he was also a Hedley Trust Scholar. He is currently the recipient of a full studentship from the University of York, where he is writing his PhD ‘Do black lives really matter?’, exploring the relationships between critical race theory, theatre, performance and production in Scotland through plays about black people in history. 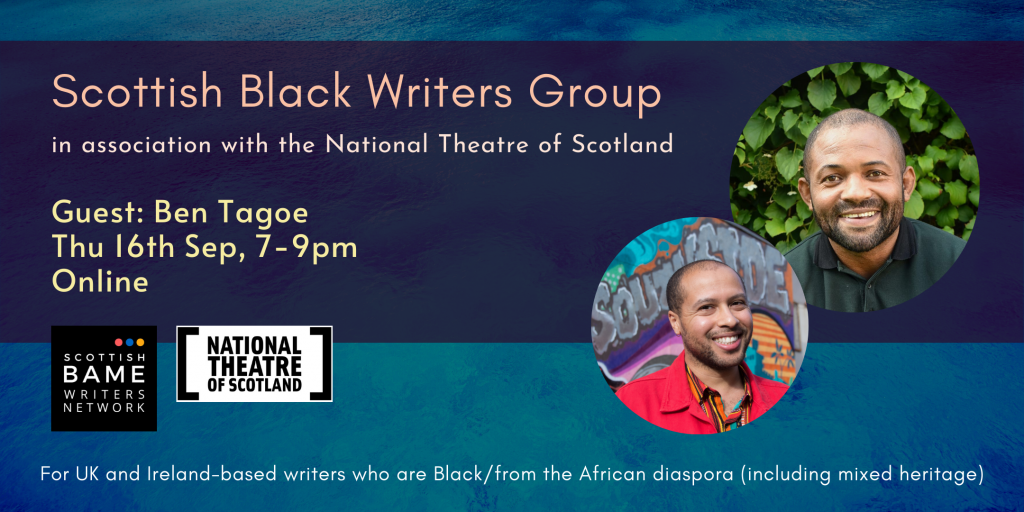 A peer support and social space facilitated by Glasgow-based author Dean Atta for Scottish Black writers and Black writers based in Scotland to meet and discuss with Black writers from across the UK and Ireland, with a guest speaker each month courtesy of Scottish PEN.

In September we’ll be joined by Ben Tagoe. In October 2020, Ben completed a 6-month Writers Room for WESTWORLD creator Jonathan Nolan’s Kilter Films. He is currently working on his second episode of the show, which is a Sci-Fi book adaptation for Amazon.

In 2019, Ben wrote an episode of the hit Sky comedy IN THE LONG RUN (Green Door Pictures), which stars Idris Elba and was broadcast as part of the second series on Sky 1(UK) and Starz (USA). His episode of STAN LEE’S LUCKY MAN (Carnival Productions/Sky Television) was broadcast in 2018.

In 2016, Ben joined the team on CBBC’s JAMIE JOHNSON. He wrote four episodes of the show across the second and third seasons. In 2017, his episode END GAME was submitted and subsequently shortlisted for the Children’s BAFTA awards, International Emmys and Royal Television Society awards.

Back in 2011, Ben was one of eight writers selected from over 500 established professional applicants for the BBC Writers Academy. He gained credits on BBC shows DOCTORS, EASTENDERS and CASUALTY as a result. In October 2014, Ben joined the writing team on ITV’s CORONATION STREET and wrote 32 scripts before leaving the show in August 2017.