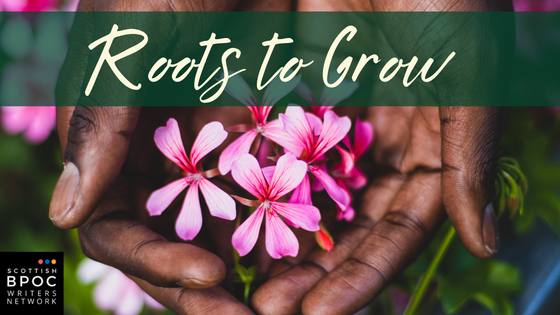 The Scottish BPOC Writers Network has been awarded funding from Creative Scotland to continue their advocacy work and professional development for BPOC writers living in and connected to Scotland.

The Scottish BPOC Writers Network (SBWN) is extremely honoured to have been awarded Creative Scotland funding for their ‘Roots to Grow’ programme. The network was founded as an advocacy group to engage, validate and connect BPOC* writers from and living in Scotland who historically experience underrepresentation and marginalisation in the literary sector. Since its inception in 2018, SBWN has facilitated a vast amount of literary opportunities for BPOC writers and facilitated necessary conversations around inclusive publishing and promoted diverse voices within Scotland.

This year’s SBWN team includes Jeda Pearl Lewis, Titilayo Farukuoye, Kelly Kanayama, Mae Diansangu, Nasim Rebecca Asl and Alycia Pirmohamed. The organisation was founded in 2018 by poets Alycia Pirmohamed and Jay Gao. SBWN is extremely proud to run a diverse programme of literary events of workshops, craft seminars, the network’s blog, audio anthologies and regular writing groups, plus festival panels, networking events and readings for another year, where inclusiveness, access, representation and community are at the heart centre of the work.

“It is extremely exciting to receive funding again in 2022. To us this is a validation and award of trust and recognition for our work, so that we may continue to champion BPOC writer’s issues on questions of representations, fairness, rights and social justice in the literary sector.” – Titilayo Farukuoye, Co-Director.

“We are grateful to everyone who supported us over the years. Thank you to those who pitched work to us, attended our events, donated funds, engaged with us on socials, and collaborated and partnered with us. Since 2018, our membership and our programmed events and opportunities have seen huge growth. So many people have helped shape SBWN, and we’re proud of the work we’ve all done together.” – Alycia Pirmohamed, Co-founder and Advisor.

The SBWN team are excited to blend a programme of in-person and online events, grow BPOC writing communities outside the central belt and build on the success of their archive of digital essays and recent publications, 2021 Mixtape: Writers of Colour Audio Anthology curated by Hannah Lavery and Marjorie Lotfi, and Metaphors for a Black Future To The Body, To The Earth (forthcoming) curated by Martha Adonai Williams. They will continue to publish work by Scottish BPOC writers through the development of these curated programmes, alongside their regular groups for QTIPOC* writers, Black Writers and Asian writers. In addition to their landmark annual surveys on the BPOC experience in Scotland’s literary sector, SBWN plans to celebrate and connect their members within the wider literary community, and make their own activities more accessible to disabled and low income writers, including bursaries for travel, data, and childcare/carers, BSL translation, captioning, online and hybrid events.

“We’re also looking forward to building new partnerships and working closely with network members themselves. Among others, we expect to bring tailored opportunities for playwrights and performance writers through a new partnership with Playwrights’ Studio Scotland, and we’re proud to see partnerships continue with Literature Alliance Scotland, Floris Books, Books From Scotland, Aberdeen Performing Arts and Edinburgh International Book Festival to name a few.” – Kelly Kanayama, Communications and Editorial Manager

“We look forward to creating more spaces for mentoring and continuing our professional development initiatives and opportunities. In our last year’s programme, we engaged with hundreds of Black writers and writers of colour across Scotland – hiring them, publishing their work, facilitating artistic development, linking with literary organisations, advocating for intersectional inclusion. Building on the efforts of our predecessors, the work we’re doing now will bring positive change to the arts and literary sectors in years and decades to come, so that Scottish literature better reflects the Scottish population, offers more role models and fairly paid work to emerging and established BPOC writers and literary professionals, and a wider range of literature to the general public. We want the world to know the incredible range of wordsmiths we have in Scotland. We are here, we belong here, our stories matter.” – Jeda Pearl Lewis, Co-Director

Alan Bett, Head of Literature and Publishing at Creative said: “We are delighted to be able to support this important new programme of work through the Scottish BPOC Writers Network. This is an organisation that not only supports and develops its membership of writers, but also advocates for positive change in the Scottish literary sector on issues such as representation. The impact of their work since they were founded is evident and ever growing.”

SBWN is very grateful for the opportunity to continue its work advocating on behalf of BAME writers living in and from Scotland. This funding award from Creative Scotland will help to ensure important programmes can continue into Spring 2023.

View the Roots to Grow Programme

Notes to the Editors

Formerly known as Scottish BAME Writers Network (2018-2021), Scottish BPOC Writers Network (SBWN) was co-founded in 2018 by Alycia Pirmohamed and Jay Gao, and aims to connect Scottish BPOC writers with the wider literary sector in Scotland and beyond. Weaving together collaborative literary partnerships, cross-arts co-creation and an intersectional approach to inclusive and participatory programming, SBWN is a sector change-maker, facilitating necessary conversations around inclusive programming in an effort to address and overcome systemic barriers.

Run by BPOC writers for BPOC writers, and informed by member surveys, consultation and feedback, SBWN uplifts, validates and provides safer spaces for marginalised voices, nurturing and promoting the current and next generation of Black and POC writers based in Scotland.

For more information and upcoming events, refer to their website: https://scottishbpocwritersnetwork.org/

Creative Scotland is the public body that supports the arts, screen and creative industries across all parts of Scotland distributing funding provided by the Scottish Government and The National Lottery. Further information at creativescotland.com. Follow us on Twitter, Facebook and Instagram. Learn more about the value of art and creativity in Scotland and join in at www.ourcreativevoice.scot.

Communications and Editorial Manager: Kelly Kanayama (she/her) is a pop culture and comics critic with a PhD in comics research. Born and raised in Hawaii but now living in Dundee, she has written for The Independent, Media Diversified, Bitch Media, and Nerdist, among others. She has also spoken on panels at comic conventions in New York, Glasgow, and London. Her poetry has been published in various print and online outlets including Lighthouse Literary Journal, Room Magazine, Ink Sweat & Tears, and Gists and Piths.

Community Manager: Nasim Rebecca Asl (she/her) is a Glasgow based poet and journalist. Her work has appeared in magazines including Gutter, The Dark Horse and Modern Poetry in Translation. In 2021 she was awarded a Scottish Book Trust New Writers Award for Poetry, performed on BBC programme The Big Scottish Book Club and was a digital writer-in-residence for The Poetry Business. She is an alumnae of The Writing Squad, a member of the Scribblers Union and participated in the Poetry Translation Centre’s programme for young poets of mixed heritage, Undertow: Polylingual Poets Please.

QTIPOC Writers Programme Curator: Mae Diansangu (she/they) is a Black queer spoken word artist, writer and performer from Aberdeen. She is co-founder of Hysteria, an arts platform that showcases women, non-binary and gender marginalised creatives. Her work has been published by 404 ink Magazine and she has been awarded commissions from the National Library of Scotland and StAnza. Mae is part of a network of Black community activists organising under BLM Scotland, and her work often centres on social justice themes.

Co-Founder and Advisor: Alycia Pirmohamed (she/her) received her PhD from the University of Edinburgh, where she studied poetry written by second-generation immigrants. She is the author of Another Way to Split Water (Polygon and YesYes Books) as well as the pamphlets: Faces that Fled the Wind (BOAAT Press), Hinge (ignitionpress), and Second Memory (Baseline and Guillemot Press), which was co-authored with Pratyusha. Her poetry has been published widely and won several awards, including the Edwin Morgan Poetry Award (2020). In 2019, Alycia curated and edited Ceremony, an anthology of Scottish BAME Writing (Tapsalteerie). Alycia-pirmohamed.com