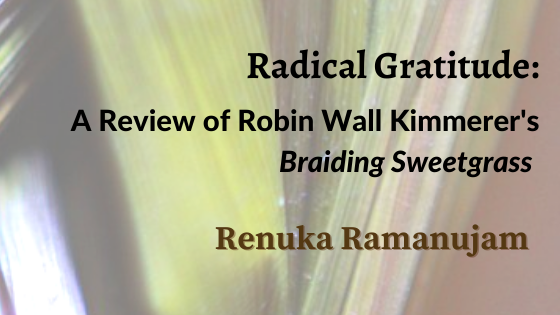 The land knows what to do when we do not.  The very best scientists are humble enough to listen.’

In a time where Western science has claimed the behemoth power of solving our climate crisis, Braiding Sweetgrass stands as a quietly radical response. In it, botanist and writer Robin Wall Kimmerer breaks the scientific silo, tying it together with the tenderness and humanity of Indigenous Native American wisdom. What would the world look like if people and land were good for each other?

The book is made up of a number of essays and anecdotes taken from the breadth of Kimmerer’s multifaceted experiences: fables richly painted. Each has a lesson to offer in how better to love and be loved by our non-human compatriots.

She explores the pain of a colonized past as a Potawatomi woman and mother seeking to reconnect to her roots. Navigating her role as a botanist and educator, Kimmerer champions pursuing ‘heart-driven science’ in the rigid confines of academia.

The narratives surrounding Kimmerer’s lessons with her students are particularly endearing.  She finds humour in their youthful views of the natural world, acknowledging the stark differences in their beginnings – ‘More and more often, the reality of nature outside the living room takes them by surprise’. However, she is never scornful or patronizing, using her mantra of a regenerative reciprocity to inspire. Taking her students to a remote biological field station, Kimmerer relates the forest to a supermarket ‘Walmarsh’ providing all that one could ever need. After a day of weaving cattail sleeping mats and birch bark wigwam sheeting, using cattail gel to soothe burns and cooking cattail kebabs, a student takes issue.  ‘We just took all this stuff without paying for it.  When you really think about it, we just shoplifted at the swamp.’

Kimmerer asks the critical question: ‘You may love the land.  But does the land love you back?’

SCIENCE THROUGH THE LENS OF LOVE

The paradigm shift that Braiding Sweetgrass brings about is the concept of a conscious loving relationship with the natural world. This is a concept many in science would scoff at, but here the result is a stunning ode to ‘the embrace between plants and humans’ beautifully backed by scientific method. Kimmerer waxes poetic about the reciprocal relationship sweetgrass basket weavers have with their sacred crop through honourable harvesting techniques. A set of cardinal rules, the Honourable Harvest provides a framework for a mutual agreement of care between people and land. This includes not taking from the first patch of sweetgrass they find, for fear it may be the last. It is entirely possible that weavers return home empty handed rather than risking wresting the land of its last yield. A request to harvest and a symbolic offering is given – often in the form of ceremonial tobacco – to ensure a consensual exchange.

A reciprocal relationship is beautiful, and at its core is a mutual recognition of each other. The creation story of Skywoman is a story about this mutual bond. A woman falls from a hole in the sky, and is caught and nursed by the animals below. Together they create the world on the back of the Turtle, the animals smoothing the shell with mud from the ocean floor and Skywoman planting seeds brought from the Skyworld. Before long, the tended soil is a lush inhabited paradise – Turtle Island, the name used to denote Earth or North America by many Native American cultures.

Kimmerer beckons you to consider that plants are not a subjugated object, but a subject that has an intelligence beyond our feeble considerations. The tale of the Three Sisters is an exquisite insight into the wonders of biodiversity. Corn, squash and beans are grown together in Indigenous agriculture in a beautiful, yet perhaps unintentional symbiosis. Their varying qualities provide support, shade and moisture for one another, allowing all to thrive. Each vegetable is playfully related to a sisterly position: the corn a stiff, towering firstborn, the baby squash growing slow and at its own independent pace away from expectation. The bean wraps itself around the corn, a flexible and adaptable middle child. Kimmerer contrasts this to the advent of settlers with plain, ‘clean’ monocultures and in need of pesticides and fertilizers.

I find myself enchanted by this analogy, warming at the thought of being the squash to my sister’s corn. However, Kimmerer is also clear to give plants their own agency; she by no means wants to use an anthropocentric approach. In Indigenous language, plants and animals are referred to as relative companions rather than inanimate objects; they too have the capacity to be teachers and take part in an exchange. Trees and rocks are given pronouns, as a form of kinship. That maple tree is beautiful.  They have been with us for a long time.

The hope is that land becomes harder to ravage when it becomes a teacher or a friend.

It’s wonderful to see that Kimmerer doesn’t shy away from the battles that have pushed her advocacy forward. Her grandfather, Asa Wall, was of the generation of young Native American children sent to the infamous Carlisle Indian School. Set up in 1879, the school was one of the earlier federally funded Native American boarding schools located off the reservations. A devastating marker of ethnic cleansing, Carlisle prevented the speaking of native tongues and forced assimilation into ‘American’ culture. Kimmerer speaks honestly about the advent of settlers and corporate capitalism; the pilgrims sought to overpower seemingly inefficient agricultural systems and primitive cultures in exchange for riches and a civilized establishment. Instead, the result has been a gross, unsustainable plundering of natural resources, breaking the ecological rhythms of the planet to create infertility and scarcity. The irony of progress and bounty is all too clear. The language that provided much stewardship was essentially stamped out.

She likens our current ecological and economic mindset to that of the Windigo – a monstrous Anishinaabe figure. Described as having a ‘mouth that is raw where it has chewed off its lips from hunger’ and a ‘heart made of ice’, the legend was created as a sort of bogeyman character to keep children in line. Kimmerer also suggests that the tale was used to reinforce a taboo against cannibalism, in lieu of dark, faminous winters. Characterized by insatiable greed and detachment from other living forces, the comparison to our relationship with the planet is perhaps painfully accurate.

This Euro-centricity also comes into play within Kimmerer’s battles in the academic world. Her own painterly visions of plant science were quickly laughed away early in her studies. As a multi-disciplinary artist, echoes of this ring relatably in my mind. A particularly stand-out instance deals with Kimmerer and a student investigating sweetgrass harvesting techniques.

‘If we use a plant respectfully it will flourish.  If we ignore it, it will go away.’

Kimmerer’s faculty colleagues initially dismissed the idea; it was not grounded in a ‘theoretical framework.’ This was an oversight through a Western-centric lens; thousands of years of Indigenous ecological knowledge should perhaps be held as an accountable standard.

Much of the movements in design and technology towards ‘bio-mimicry’ are not novel – but have existed in these Indigenous cultures for centuries. This is why these interwoven stories and philosophies are more than just that. They are a reminder that many have walked the Earth long before, living successfully in a deep reciprocity with the natural environment. It is a call out that we should be strengthening these voices of knowledge and care as a beacon to follow.

As a preface to a chapter about maple sugaring, Kimmerer relays a cautionary Anishinaabe tale of how the water-like consistency of maple syrup came to be. Originally a luscious, thick saccharine gift, the syrup’s beauty drew villagers from their responsibilities of tending their fields and caring for one another. In Anishinaabe legend, Nanabozho was the ‘Original’ man tasked by the gods to caretake the planet in communion with nature. Angered to see the exploitation of nature’s gifts, he poured water from the rivers into the trunks of the maple trees as a reminder.

Just as how we drizzle a tiny trail of syrup on our pancakes, the book should be consumed over time and with care. This is not a tome to devour or be rushed. We are being taken on a journey from Creation with the story of Skywoman, to the potential depths of consumerist emptiness with the shadowy legend of the Windigo.

Allowing myself this time has given me the opportunity to truly absorb what I was looking at around me in the Highlands. I found myself greeting a bee making its way out of a hooded petal, and following the rules of an Honourable Harvest in my quest for saffron chanterelles. Kimmerer is well aware that leading an environmentally righteous life is easier said than done, but a simple mindset shift is ever so powerful.  Braiding Sweetgrass is a beautifully written exercise in gratitude for our planet, a simple starting point for us all. 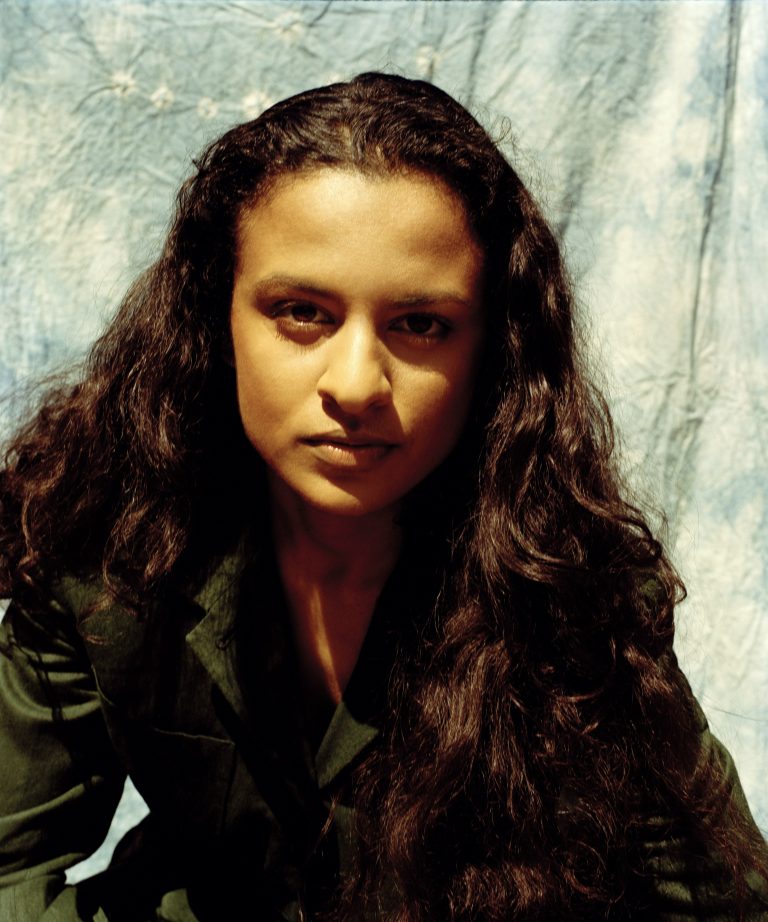 Renuka Ramanujam is a freelance writer, printmaking artist and textile developer based in Oban, Scotland.  Her work and research focuses on the relationship between people and planet, questioning cultural tropes and designing towards a decolonized future. Ultimately, she tries to bring about questions that will aid towards the movement of a more inclusive, aware and caring society. She created her art-led design studio MUDRA in January 2021 to encompass all areas of her practice.

Renuka has written for publications such as The Slow Grind by the Laundry Arts, The Kol Social, Footprint Mag and The Flock.