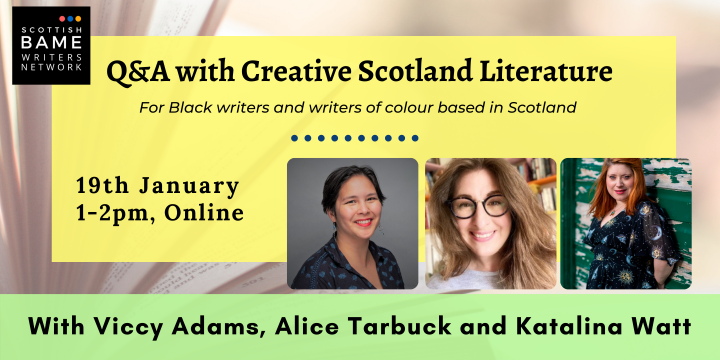 This is an opportunity to learn and ask about how Creative Scotland’s programmes and funding can support you as an individual writer. Sign up here!

Please be mindful when booking. This is a workshop for Black writers and writers of colour based in Scotland (or for people who, pre-COVID, would have normally been resident in Scotland).

Come and hear from Literature Officers at Creative Scotland and ask them questions about their programs and support available for individual writers, including:

Essential items include: access to the internet, a working camera and mic, and pen and paper

Before participating in this online event, please note the following:

Viccy Adams (she/her) has a background in academic research into creative writing, and worked as a freelancer in the literature sector in the UK for a decade before joining Creative Scotland in 2019. In her role as Literature Officer she has supported the redevelopment of the application process for the Open Fund for Individuals and initiated a number of targeted partnerships to support writer development in Scotland, including Our Voices and Refreshing Your Practice. She also writes short fiction and collaborates with other artists, with a particular interest in digital processes.

Katalina Watt (she/they) is Literature Officer at Creative Scotland and previously worked in Audio and Digital for Canongate Books and Hachette, as well as event programming for independent bookshops. In 2020 she was the Next Level Awardee for Literature Alliance Scotland’s career development programme. Katalina is also Audio Director for khōréō, a speculative fiction magazine for immigrant and diaspora authors. As an author, they have received a Ladies of Horror Fiction 2021 grant and were Longlisted for Penguin Write Now 2020. Katalina is represented by Robbie Guillory at Underline Literary Agency.

Dr Alice Tarbuck is an award-winning writer, and a literature professional, living in Edinburgh. They have taught Creative Writing at the University of Dundee, and are a 2019 Scottish Book Trust New Writer’s Awardee for poetry. Their debut non-fiction book A Spell in the Wild: a year (and six centuries) of Magic is published by Hodder & Stoughton. They are one of the Literature Officers at Creative Scotland.