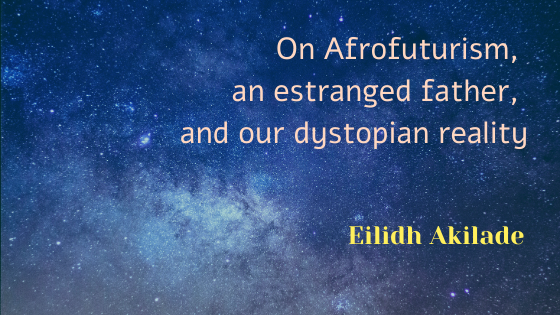 I think he probably used to watch TV like that as a child. Flat on his stomach across the living room floor, head propped up on his hands, legs sometimes kicking up at the back, uncared for. Every now and then he’d roll on to his side, shift a little, eyes still focused on the screen.

My dad was always keen to share his love of stories with us growing up – and this was especially true of his love for sci-fi and fantasy. We spent our Sundays gorging on Avatar, Doctor Who, The Time Machine, Terra Nova, The Planet of the Apes. We spent our car journeys picking apart all those grand ideas, imagining how space and time may work and rework itself, looking to an existence grounded in the impossible. When bedtime arrived, we’d turn from the technological to the magical, sinking into the fantasy worlds of The Phantom Tollbooth and His Dark Materials, read, of course, by our dad himself.

But we didn’t realise these moments were grounded in whiteness. We only heard white stories from white voices, and we were completely and utterly unaware how this might take its toll.

It’s now about eight years since I last spoke with my dad and it’s only recently that I’ve come across Afrofuturism for the first time. Estrangement is complicated and there is rarely the space to dwell on its complexities.  Nevertheless, in February of this year, I found myself in the university library, dwelling on both my estranged dad’s love of stories and how Afrofuturism bends these traditional narratives. Afrofuturism can broadly be understood as a Black cultural movement within –  but not limited to  –  film, television, literature, music, art and fashion. It looks to a radical imagination and manifestation of Blackness itself. In doing so, it reaches into the science fictional, the fantastical and the historical. It’s not some liberal colour-blind imagined state: it centres the experiences and identity of the African diaspora within narratives both similar and dissimilar to our own.

Afrofuturism displaces us while also firmly placing us. Its narratives often see the diaspora in imagined spaces – whether that is a different city, planet, or universe. These spaces are unknown to us and therefore the rules are of our own making.  However, such rules do not exist in our current white dominated society. The possible impossibilities of these spaces remind us that there is a world different to our own – one without a pandemic and a climate crisis. The existence of such spaces, untouched by racism or other injustices, reminds us there is a better world and it’s one we deserve to exist in.

Afrofuturism also looks to the past. It is a movement that is  unafraid of our history. Afrofuturism doesn’t rewrite anything; rather, it gives us new ways to understand and heal. Sometimes this involves the supernatural.  Sometimes, the technological.

It’s perhaps the technological which is the most striking aspect of Afrofuturism’s aesthetic. Afrofuturism utilises technology to rewrite the racist tropes of mainstream white media – Africa is no longer primitive or in need of saving.  Black Panther’s Wakanda shows us exactly that.

My afternoon in the library had slipped into a late-night affair. Through Wikipedia pages and JSTOR articles, I first listened to George Clinton’s Computer Games. This is a much-loved Afrofuturist album, its tracks mixing funk with techno. Saxophones and laser beams in perfect harmony. That afternoon, as I listened, I realised the album sounded how my dad looked as he danced:  shuffling, twisting, curving.

Afrofuturism too is an impossible twisting of time and space. I’ve witnessed this circularity within myself in the last year or so, as I find myself writing, just as my dad did. It is often as if I am writing from him, to him. From my childhood spent with him, to my adulthood spent without him. Communication is circular. It is happening simultaneously, across different timelines; it is never-ending and it is constant. This is true in Afrofuturism, and this is true when it comes to me and my dad.

It’s difficult to imagine that Afrofuturism would not have changed that small Black boy’s life. It speaks to a Black hope and power that I imagine would have been in slim supply for my dad in 1960s Glasgow. Perhaps, an encounter with Afrofuturism would have changed our relationship. Perhaps, it would’ve given my dad an opportunity to love and connect with a part of himself that a racist society did not want him to meet. There’s every chance that these presumptions are merely symptoms of my own ignorance, a hangover of childhood naivety. There is every chance that my dad has always been  the biggest Afrofuturism fan and that he simply never brought it up. But something tells me if he was,  he would have given Afrofuturism to us. He would have wanted to give to us all it had given him. I hope he has since found it and that it has given him hope for all that is still to come. Hope for himself, but perhaps also for us both, together. 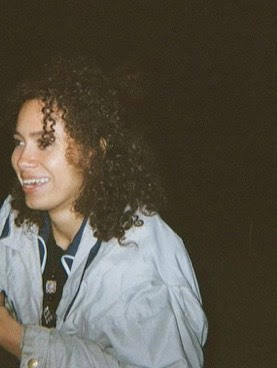 Eilidh Akilade is a Glasgow based English Literature student. She has written for publications such as gal-dem, The Skinny, and Bella Caledonia. Her writing covers a range of topics, primarily culture, intersectional feminism, and race.