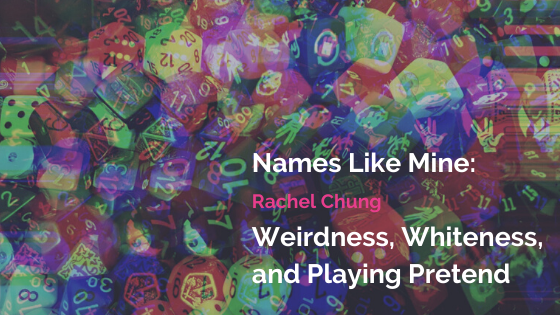 Names Like Mine: Weirdness, Whiteness, and Playing Pretend by Rachel Chung

I LARP, okay? I LARP. So let’s just get that out of the way now. When it comes to obscure hobbies, LARPing – Live Action Role Playing – has lately become one of the most widely known. LARP is most closely related to tabletop role-playing games. For reference, think of Dungeons and Dragons, but you’re acting out what you’re doing instead of narrating. The player receives (or creates) information about who their character is, and they ‘play’ the game by improvising decisions and following a plot based on their character’s traits and principles. Most recently featured in the television series of What We Do in the Shadows, LARPing is as broad as it is mysterious. Boffer LARPing – in which you dress up, go into the woods, and beat your friends with toy weapons – is what I always thought of before I began. But there is another side of LARPing: Nordic LARPing. These games are most similar to long-form improvisation, but with costumes, as well as intrigue, romance, grief, and/or murder. Before playing a Nordic LARP, a player receives extensive documents detailing the rules of the game, the setting, and even historical background of the fictional world. They also receive a private character sheet which tells them who they are, what they know, and what they want to achieve in the game. These games are run by Game Masters (GMs), and the game follows twists and turns as players reveal their secrets and new information is slowly revealed. They can last an hour, a day, or even a week. For me, it’s the closest you can come to actually living in a feature-length film. It is writing and performing a play with no audience. All this is primarily to say that I found a home in LARPing that I did not expect to find.

What Does LARPing Have to Do with Any of This?

I wouldn’t consider myself particularly alienated from the mainstream, but I would certainly consider myself ‘weird’. And I consider myself white-passing. It was no surprise, then, that I managed to pass in and out of these LARP spaces without feeling particularly out of place. But when I really started paying attention, I noticed the races – or lack of races – of the characters I was being asked to play. For the most part, the LARPs I was playing in happened in fantasy worlds with made up nations or with historical groups of Eurocentric origin. Since I started four years ago, I can count the number of players of colour I have met on both hands, and the number of parts I’ve encountered for characters of colour on just one. Even though many of the parts I’ve played are ‘raceless’, the writers are almost always white. A vast majority of the players are white. Though the message is vague, the impact is clear – whiteness remains the default, the blank slate. Any ‘colour’ added to a character’s history is something extra. In my limited history with these games, there have been a few notable exceptions – one game written originally for specific players did engage with racialised narratives. It was the only game I had played (at the time) that had any relationship to race at all. Games like these raise a converse question: once you’ve written a part for a character of colour, must that part always be played by a person of that race? Such a request, given the ‘ethnic makeup’ of LARPing nerddom, would be impossible.

I am as guilty as anyone of writing these raceless characters from Nowhere Land. For a long time my own whiteness let me believe that ‘no race’ was an acceptable substitute for adequate representation. I assumed that because I was sufficiently weird that the rest would take care of itself, but it never did.

Okay? And What Can Be Done About It?

It wasn’t until I played a game written by a friend of mine that I realised how important it is for me to play (and play with) characters who look like me and have names like mine. TC, as I will call him, wrote and ran a game over the course of which it was revealed that we were not the intriguing alien explorers we thought we were. In a surprise metafictional twist, it turned out that we were now playing writers doing our best to create a science fiction show that represented who we (as characters) were. My new character sheet said, ‘…That sort of “greenface” died with Jar Jar Binks….And telling those personal stories is up to writers like you, especially in a room as white as this.’ This new self-aware character perfectly encapsulated how writers – and players – of colour find themselves bearing the brunt of representative writing. Why write characters of colour when such a vast majority of the players are white? TC later said that the character I played was based on things I had said to him about being a mixed-race writer. It was a high compliment, but it also raised this question: what is my responsibility to my writers of colour community as a person who also lives in passable whiteness?

TC himself writes that he alternates between ‘feeling’ white, Cuban, and Jewish, depending on where he is. His identity is always active in a way that speaks to me. I asked him why he writes characters of colour, and what he does when he has all white players. TC said: ‘It is my preference when I have players who are racial minorities that they get to play those two characters, and I steer them towards those roles, because they don’t often get to play roles that tell stories like theirs. But when I have an all white-passing cast, I still want these roles in the game, because they are important stories for people to know of and experience.’ It seems like a simple idea – after all, writers of books, TV, and movies have all begun tapping into the stream of characters of colour. The representation that we see in most TV and film is targeted at the audience – their money, their engagement. It is part of a consumable product. But something about LARP is inescapably personal. We pour ourselves into these characters, and we fill the cracks in ten pages of character history with a lifetime of memories. In LARP, consuming is writing. The audience are the players, and the players work together to write the story based on what they’re given. When I write LARPs, I want to evoke something truthful for players to discover, and that’s what TC managed with his game. Instead of pretending that race doesn’t exist, he evokes feelings about Being a Race without relying on tropes or tokenisms. He says, ‘On a more abstract thematic level, this game is asking what goes into art. Is artwork determined by the material factors of the people who make it?’ TC considers race as an essential part of the world a character inhabits in a way that whiteness has always evaded. For those of us born of immigrants, born of brown faces, our ‘world’ is not the default world of whiteness. Our worlds require constant creation even in the realm of the imaginary. LARPing is, so far in my experience, an untapped slate for the creation of these worlds with the same unbridled creativity that gave birth to the canonical worlds of Tolkein and Lewis. Why can’t my race play a part in the vast fantasy worlds I am invited to build? My favourite thing about LARP is that – because playing is writing – it can be.

Our blog content is always free to read but if you enjoyed this piece, we kindly suggest a small donation to Black Lives Matter UK Fund: www.gofundme.com/f/ukblm-fund 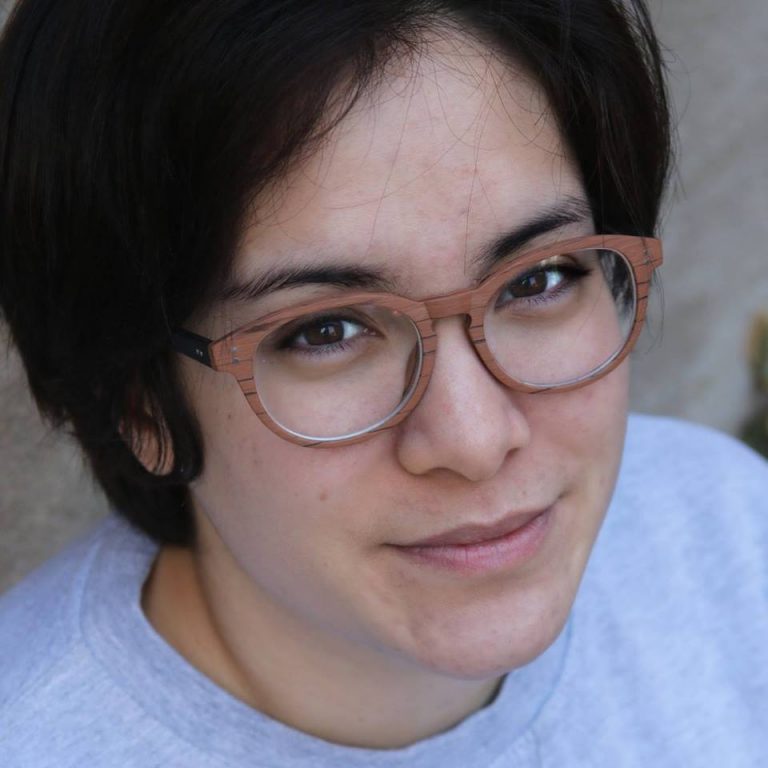 Rachel Chung is a PhD student at the University of Edinburgh, where she is writing her dissertation on sexual violence in Shakespeare productions performed by casts of all women. Her writing has appeared onstage at the Producer’s Club and Shakespeare on the Sound and in print with Gutter and Inquiries. She Tweets at @racheljmchung.