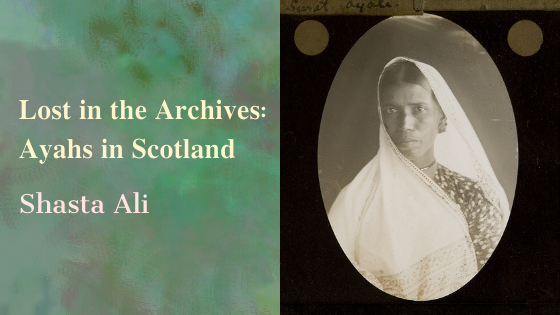 The legacies of imperialism are always closer to home than we think. 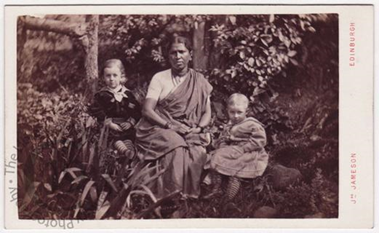 Figure 1. An ayah with her two charges. The Library of Nineteenth Century Photography, Photographed by James Jameson of Edinburgh (Poss, 1881).

She tugs on the layers of her drenched white sari, pulling the cloth tightly across her head, the wind biting around her. Leaning down, she wipes the raindrops from his cheek. His little hand grips hers tightly, her tanned skin contrasting against his pale skin, and she gives him a reassuring squeeze. Her lips brush across his forehead, and in that moment he is every child back home. Her heart aches when she thinks of the children left behind. She can feel the warmth of the sun on her face, the chatter of children playing….’Hurry, hurry!!’ the familiar, yet strange words jolt her back to the wet, grey landscape she finds herself in. For a fleeting moment, fear rises. She hasn’t seen many like her here on these cold streets, but she knows others had travelled the kala pani to be here. She takes solace in this truth, that somehow they’d brought a little bit of India to this foreign land.

The boy pulls on her sari, chewing on the thin blue border fraying at the edges. Gently, she pulls the cloth back and hurriedly fetches the umbrella for her memsahib as she steps outside. As his mother bustles around him, he peeks around her trying to catch the attention of his ayah. His little arms flailing to be lifted by her, he starts to weep. She rushes over, whispering words she’s carried silently across lands. They hang with unfamiliarity in the damp air, but between the boy and his ayah, they form an unbreakable bond. He immediately soothes.

The year is 1886 in Victorian Edinburgh. It’s strange to imagine a sari draped South Asian woman, in my hometown, wandering along Scotland Street. I can only imagine what she was like, as all I know of her is from this advert:

The ayah is ‘well recommended’ but I have found no personal details about her. What I do know is, other Indian women like her, working as ayahs, were present in Britain at some point from the 18th to mid 20th century.

I first came across ayahs from the pioneering work of Rozina Visram, and the inspiring work of Farhanah Mamojee, founder of the Ayahs Home Project.

Ayahs, known as the world’s first global migrant domestic workers, were once an integral part of British households in India, where colonial families hired female servants as nannies to take care of their children.  Indian servants, a significantly cheaper domestic work force, quickly became indispensable, and suited the exploitative pursuits of the British Empire. 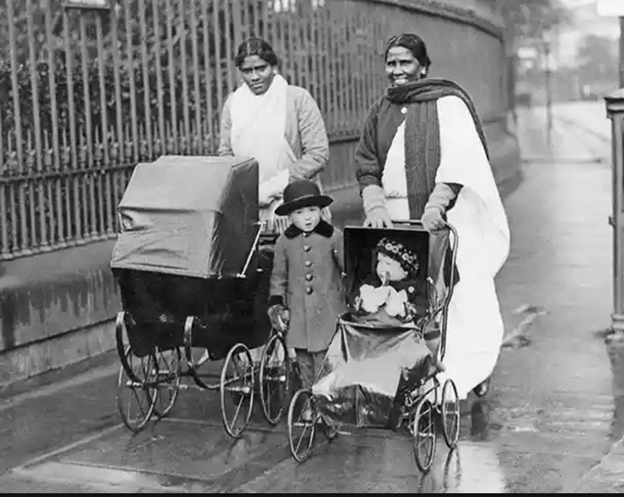 Racial and gender divisions meant that whilst colonial families travelled first class, the ayahs mostly travelled separately and uncomfortably at deck level. Hostile attitudes, fuelled by misconceptions of ‘natives’ being dirty, intellectually inferior, dishonest and immoral, cemented the racial hierarchy prevalent, especially in the nineteenth century. This was further apparent in the linguistic positioning of ayahs in passenger manifests, where they were listed namelessly as property of the owner e.g. ‘Grant’s Ayah,’ or registered as the ‘child’s ayah’, and almost always listed last, even after named European servants (Robinson, 2018).

British families travelling back and forth from India to Britain, often hired travelling ayahs or brought their family ayah on the long and occasionally treacherous sea voyage.  Before the Suez Canal opened and the advent of steam powered liners, these journeys could take up to six months. The ayah on board had the sole responsibility of looking after children and their memsahib. 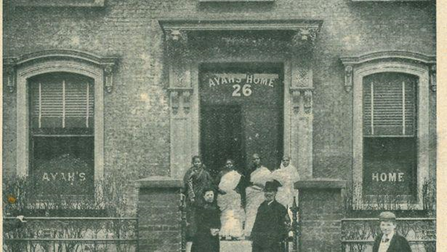 Sadly on reaching Britain, some of these ayahs were discharged without pay. With no formal contract of employment, some with limited English, they were left destitute and homeless in a foreign country. Eventually, records show that the Ayahs Home in London was established, founded by Christian charities as a refuge for ayahs and amahs (Chinese nannies), until placements or return journeys were found. By the 1850s, an estimated 100-140 travelling ayahs visited Britain each year. By 1921, the Ayahs Home was recording up to 223 women per year, signifying the incidence of abandoned ayahs. 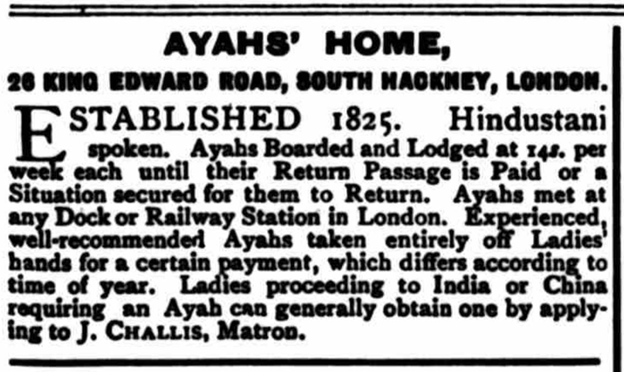 The women that history forgot

I was captivated by these South Asian women and eager to see if ayahs had been present in Scotland. After all, Scotland’s involvement in slavery, empire and colonialism is significant. People from all over Scotland both participated in and benefitted from the British Empire. The wealth generated through these imperial systems enriched Scotland, its built environment and society; its legacy continuing to the present day.

However as working class Indian women, the voices and realities of ayahs have been subdued into the shadows, and very little is known about them. 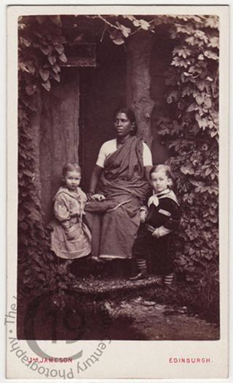 Figure 6.  An ayah with her two charges. The Library of Nineteenth Century Photography, Photographed by James Jameson of Edinburgh (Possibly 1881).

The absence of information is frustrating. Piecing together snippets of mentions collated in archives of ship manifests, newspaper adverts, imperial documents, literature and art is glaringly void of personal testimony. This linear narrative means that what we know of ayahs and many other marginalised communities, is mostly written, as Saidiya Hartman puts it, by ‘colonising cultures’ where “language and narrative are entangled in the mechanisms of power.” Without records and stories from the ayahs themselves, I am left asking:  Who were these women? What were their names? Were they treated well? What happened to them?

The fragments of archives

During my research, I did find references to ayahs in Scotland, and specifically Edinburgh. The earliest mention of an Indian ayah being present in Edinburgh, dates as far back as 1802, to an address in Charlotte Square.

As I traced their footsteps around the charming cobblestone streets of Edinburgh, nestled among a backdrop of beautiful neo-classical Georgian architecture, I couldn’t help but feel a connection with the migrant Indian women who centuries ago, silently moved around this city. Heritage is a legacy of the past and knowing that a part of my culture was here long before me, is healing.

I find evidence across Scotland including Glasgow, Aberdeenshire, Dumfries and surprisingly, even the Isle of Skye. People were either looking for an ayah or recommending their ayah’s services for passage back to India.

Occasionally adverts mentioned the ethnicities of the ayahs and this helped build a picture of the ethnic groups present in Scotland centuries ago, including Indian, Goanese, Malay, Burmese and Chinese.

Naively, I was surprised by the breadth of transcolonial connections with Scotland. Ayahs recommended as ‘good sailors’ were travelling to and from Ceylon*, India, Burma, Columbo and Aden.*

The language in the adverts is telling.  Some ‘wanted’ adverts for ayahs were specific enough to ask for or recommend a ‘Madrassi/Madras ayah’ meaning someone from Madras. These ayahs were known for their sophistication and appealed more to the British elite.

With this blog, I want to nudge these women out from the margins of history. To build a story of presence; of ayahs, South Asian and other migrant women that were present in Scotland, long before it was acknowledged more widely.

Ayahs were radical women of their time – solo adventurers and explorers, breaking race, class and gender boundaries. Yet, there’s no denying that ayahs endured hardship. Some lost their lives whilst travelling, many never made it back home, disappearing without a trace. Others converted to Christianity under pressure, adopting anglicised names and therefore their traces were lost once again.

Ayahs undoubtedly left a piece of themselves with every family and child they worked and cared for. There are many accounts of adults speaking fondly of their childhood ayahs, including actors Joanna Lumley and Brian Cox.

My research has opened many interesting doors, and I remain convinced Scotland holds more stories of ayahs, yet to be uncovered, and I look forward to connecting them together.

On a wider scale, we do need an honest and accurate reflection of British history that acknowledges the diverse contributions of minority groups and shared histories. I wholeheartedly support the official campaign to include Partition, South-Asian & British colonial history curricula across the UK.

Please do get in touch with me if you have any information on ayahs in Scotland. Perhaps you have stumbled across a treasure trove of family memorabilia? I’d love to hear more. 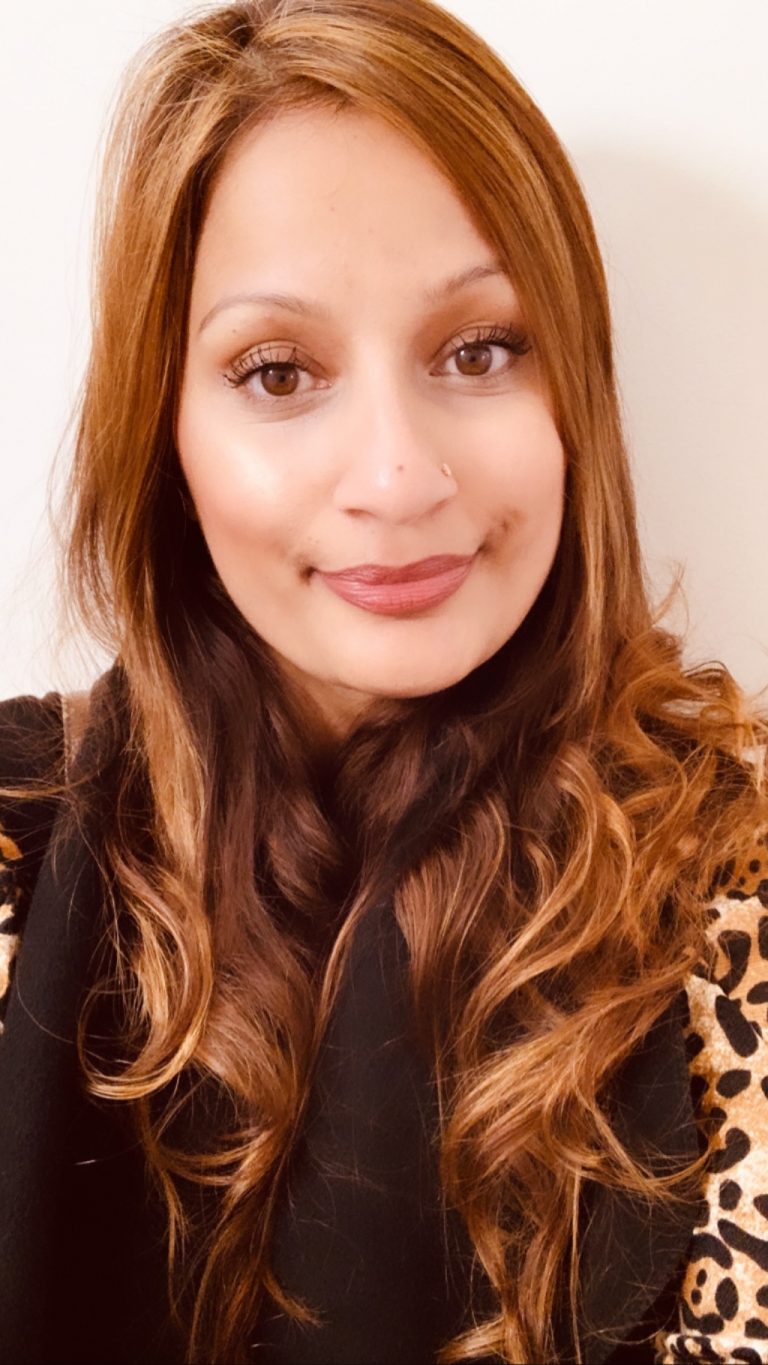 Shasta Ali works in the Third Sector and is a writer, anti-racism and women’s rights campaigner.  Her writing explores race, identity and heritage, with work published and featured in The National, STV Scotland, Fringe of Colour Films, Pass The Mic Scotland, among others.  Shasta lives in beautiful Edinburgh and can often be found with a cup of tea, pondering how we’re all part of a global story, with more uniting us than dividing us.