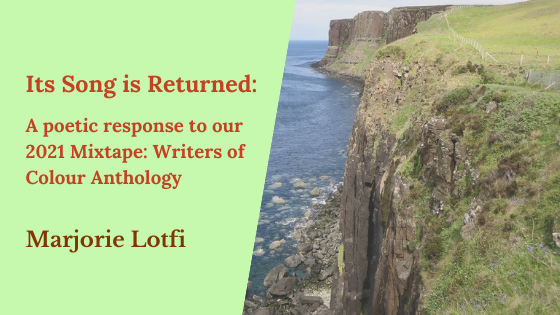 This poem was inspired by the 2021 Mixtape: Writers of Colour Audio Anthology, published in April 2022. I listened over and over to the beautiful pieces on those recordings. Watching the birds on the cliff edge of the west coast of Scotland one morning, I suddenly realised that what I was seeing – a natural ecosystem – was exactly what I’d felt while listening: writers telling their stories within an ecosystem of support, appreciation, and acceptance despite the wild diversity of voices. We all can so easily feel we’re on the edge of things, different from those around us (whether that’s generational, cultural, or in any number of smaller ways). But despite what we’re often made to feel, we also have a right to articulate our own place within this world around us.

Its Song is Returned

I sit near the cliff edge. Below, the sea

for low tide, the water tinting

the world sky blue, as if looking up

to sun. I peer over the edge, tip

my body to examine a round black form

for movement. The water foams; it raises

its head from beneath a wing. Behind

me the forest floor is covered

with a fine dusting of bluebells; the violet

against green inverts the air, they nod

without my turning. Below, the bird preens,

plucks at an invisible enemy on its breast.

Between us, the cliffside is wrapped

in hawthorn and bramble. Would it catch me

if I fell – if I jumped? Thin as a wafer

in this wind, I close my eyes and hear

the birds sing – one calls in its language

and its song is returned, as different

as they are. Now a swallow wings

from land to cliff and another lifts, taut

as a kite.  Almost still, terns sail the invisible

draughts that loop up from the water’s edge.

Their bodies hang together mid-air – holding 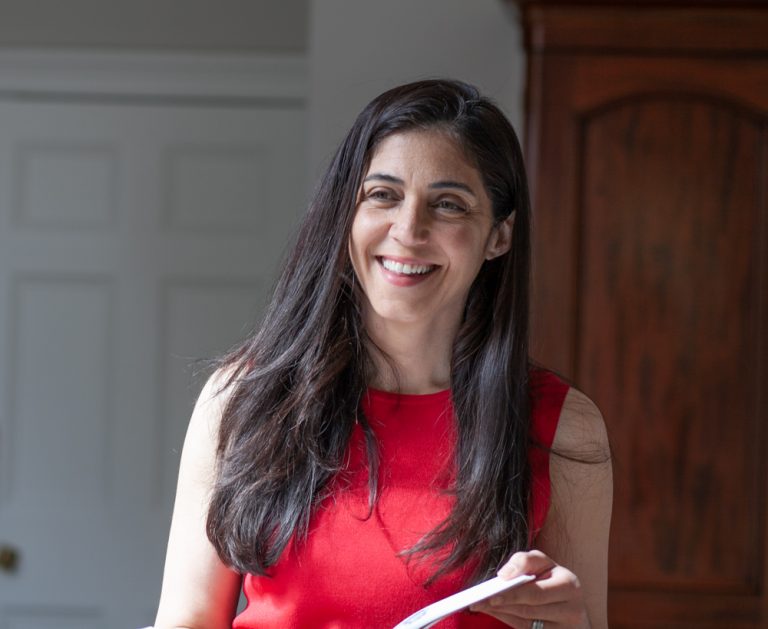 Marjorie Lotfi’s writing has won competitions, been published widely and performed on BBC Radio 4. She is a winner of the inaugural James Berry Prize, and her first collection is forthcoming with Bloodaxe Books in 2023. Refuge, poems about her childhood in revolutionary Iran, is published by Tapsalteerie Press.