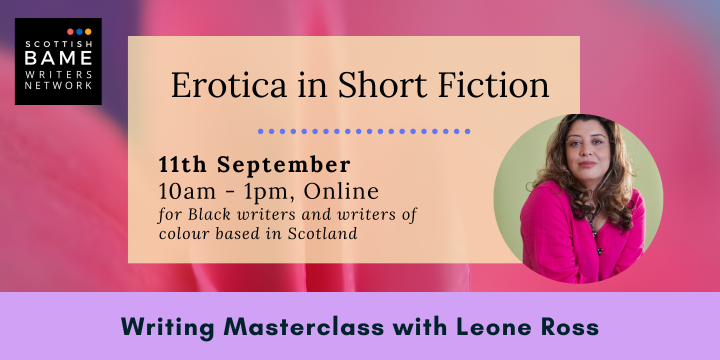 Learn to take the craft of erotica in short fiction seriously…and begin to write sex gloriously. Sign up here!

Please be mindful when booking. This is a workshop for Black writers and writers of colour based in Scotland (or for people who, pre-COVID, would have normally been resident in Scotland).

I want to help you to take this craft seriously…and to begin to write sex gloriously.

This is a 3-hour masterclass, including a 20-minute comfort break and a short Q&A session towards the end.

Essential items include: access to the internet, a working camera and mic, and pen and paper

Before participating in this online event, please note the following:

Register for Erotica in Short Fiction with Leone Ross

Leone Ross was born in England and grew up in Jamaica. Her first novel, All the Blood Is Red, was longlisted for the Orange Prize, and her second novel, Orange Laughter, was chosen as a BBC Radio 4 Women’s Hour Watershed Fiction favourite. Her short fiction has been widely anthologised and her first short-story collection, the 2017 Come Let Us Sing Anyway was nominated for the Edge Hill Short Story Prize, the Jhalak Prize, the Saboteur Awards and the OCM BOCAS Prize. Ross taught creative writing for twenty years, at University College Dublin, Cardiff University and Roehampton University in London. She is editor of Glimpse, the first Black British anthology of speculative fiction, due out in 2022 with Peepal Tree Press. Prior to writing fiction, Ross worked as a journalist. Leone Ross lives in London but intends to retire near water.