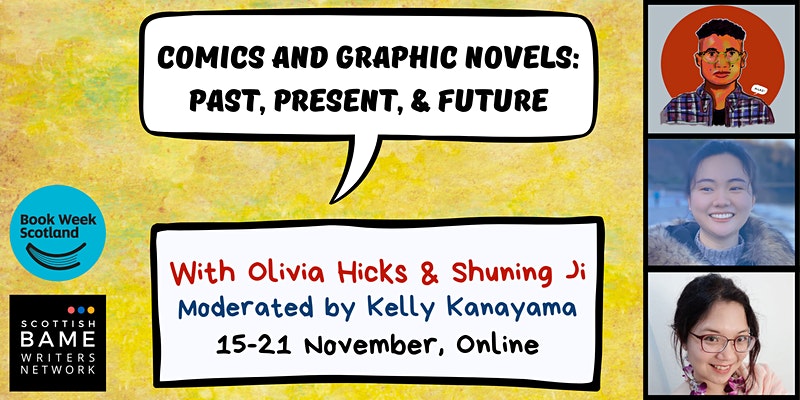 This event is ticketed – register here.

Olivia Hicks is a comics creator and editor. She has a PhD in Comics Studies from the University of Dundee and currently works for Rebellion. She has written for 2000 AD, Misty, Cor!! Buster and Monster Fun. She is best known for her webcomic Sarararara which was nominated as best webcomic in Comicscene’s 2019 Comic Awards, and for Grand Slam Romance, which is co-created with Emma Oosterhous.

Shuning Ji is a Chinese illustrator, comic artist and character designer, and currently based in Edinburgh, Scotland. She specializes in storytelling through character design and atmospheric concept art. She finished her master’s degree in illustration at The University of Edinburgh in 2021 and now she creates her own work as a freelancer. Social media:

Kelly Kanayama is the Communications and Admin Manager for SBWN, and is a comics and pop culture scholar and critic. Born and raised in Hawaii but now living in Dundee, where she received a PhD with a focus on comics research, she has written for The Independent, Media Diversified, Bitch Media, and Nerdist, among others. She has also appeared on panels at comic conventions in New York, Glasgow, and London. Currently she is writing a book on the comics of Garth Ennis.

Book Week Scotland is an annual celebration of books and reading, supported by Creative Scotland and SLIC. This year features a blended programme of events and activities for all ages. Find out more and see what’s on here.

Discover opportunities, news and events on our blog.